I am so pleased to present romance author, Annette Mardis to the blog today. Annette is a fellow LSBooks house author and is here to talk about her upcoming release, Shore to Please. We also have a character interview with the main character from Shore to Please, Flipper O’Riley. 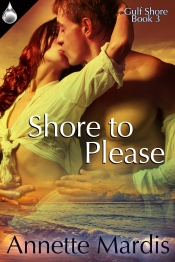 Thanks so much for hosting me, Amy. My latest book, Shore to Please, the third installment in my Gulf Shore contemporary romance series, spotlights one of my favorite characters, Paul “Flipper” O’Riley, head dolphin trainer at Gulf Shore Aquarium. He’s loyal, funny, and hard-working, and he’s fighting an attraction to a woman who couldn’t be more wrong for him.

Tara Langley is cofounder of SWADS, short for Stop Whale and Dolphin Suffering. She thought she’d found the love of her life, but he betrayed her with another woman. So she buried herself in her mission: convincing Gulf Shore Aquarium that dolphins and whales belong in the wild, not in artificial pools.

If Tara had her way, Flipper would lose the job he loves, and for him that’s an impossible scenario. The aquarium’s dolphins are his babies, and his life revolves around them. While he’s open to having a real family one day, Tara is the last person he would choose to be his wife and the mother of his children.

These two should be sworn enemies, after all. He certainly swears at the sight of her. And his surfer-dude looks and lover-boy reputation aren’t exactly what Ms. Prim and Tidy had in mind when she pictured her ideal man.

There’s no possible way a relationship between Flipper and Tara could work, right? They’re like fire and gasoline. So why do they both want so badly to light the match?

As the two struggle to find common ground amid all the quicksand, Flipper and his coworkers become the targets of an increasingly more menacing campaign to force the aquarium to release the dolphins under its care.

Tara, whose group has picketed the aquarium in the past, immediately becomes suspect. Is she being falsely accused? Flipper is quick to defend her, but is she deceiving him along with the police? Or do more sinister forces have Gulf Shore Aquarium in their sights?

Gulf Shore Police Detective Joanna Tompkins is racing to catch those responsible before it’s too late.

While Shore to Please revolves around Flipper, Tara, and the threats to the aquarium, the book also advances the story lines of other favorite characters, including Evan and Dani, Cosby and Monica, and Jo and Kelsey. Readers will meet a few new faces, too, and a couple more adorable critters join the cast as well.

Shore to Please is set for release June 22 and will available at all major e-book sellers:

Speaking of Gulf Shore Aquarium’s hunky head dolphin trainer, I sat down with Flipper recently for an interview. He was charming and funny, as usual, but I saw cracks in that lover-boy, surfer-dude image he’s cultivated over the years. Here’s what he had to say about that and other subjects.

You seem different since Tara Langley came into your life. Is that a fair observation?

I doubt she’d agree. In her opinion, looking good in a wet suit and charming an audience are the only job qualifications for a dolphin trainer. If she had her way, my profession wouldn’t exist. Just when I think we might be able to find common ground, it turns out to be quicksand. It’s frustrating and irritating.

Are you saying there’s nothing between you two? I sense a lot of smoldering heat there.

Oh, there’s heat all right. But not the good kind. She doesn’t seem to care that Gulf Shore Aquarium’s dolphins were either rescued or saved from miserable conditions at another facility that went out of business. She thinks anyplace that has dolphins must be exploiting them, which just isn’t true. No matter what we say to each other, it rubs the wrong way.

You don’t find her attractive?

(Big sigh) She’s gorgeous, obviously, and I’d have asked her out already if I sold insurance for a living or she wasn’t the head of SWADS. By the way, that stands for Stop Whale and Dolphin Suffering. What kind of a ridiculous name is that? We take wonderful care of our dolphins. I love them as though they were my children, and my excellent staff is dedicated to them, too.

So there’s no chance you and Tara could get together romantically?

That would be like a vegetarian dating a butcher. Not. Gonna. Happen. So please, just let it go.

If you insist. Let’s talk about those three pilot whales you helped rescue recently off Naples, Florida. How are they doing?

They’re holding their own. I hope we’ll be able to release them eventually, but that has yet to be determined.

Trident’s doing great. He’s getting acclimated at our dolphin habitat, Dolphin Inlet, and we’ve been working on gating and other behaviors. Gating means getting him to pass through gates from one pool to another. There are no gates in the ocean, of course, so it’s something you have to teach a dolphin. He’s a little hesitant, but he has such an exuberant personality, and he’s a fast learner. Trident is a lot of fun to be around. I’m going to enjoy watching him grow up, and so will my staff and the public.

What made you decide to be a dolphin trainer?

My parents took me to SeaWorld when I was a kid and I fell in love with the animals there, especially the dolphins. I wanted to be either a dolphin trainer or a Major League Baseball player. I played college ball and maybe could’ve been drafted by a pro team. But I would’ve kicked around in the low minors, never reaching the big time, and that’s not how I wanted to spend my life. And then in college I did internships that cemented my desire to work with marine animals. I’ve never regretted that decision.

I don’t want to spoil any surprises in your story, so I’ll ask a general question. Are you satisfied with the way things turn out for you at the end of Shore to Please?

Yes, absolutely. But I could’ve done without those crater-sized holes in the road. Adversity builds character, I guess, and it makes for interesting reading, with all the twists and turns. Saying some of it wasn’t fun is an understatement, but it was worth it to wind up where we did.

Author Bio
Annette Mardis writes the kind of contemporary romance novels that she loves to read. Her characters are the type of people you’ve worked with or lived next door to, and the plots are filled with the dramas, disappointments, joys, passions, and humor of everyday life. Her Gulf Shore series will transport you to a fictional coastal Florida town where you’ll taste salt on your skin and feel sugary white sand between your toes, the warm sun on your shoulders, and the sea breeze ruffling your hair.

You’ll meet swoon-worthy alpha males who aren’t embarrassed to cuddle a rescued baby dolphin in their muscular arms, and accomplished women looking for an equal partner who thinks that smart is sexy. You’ll get up close and personal with sea life, join the “snipe and gripe” club for girls’ nights out, and fall in love with a parrot who acts like a little boy in a bird suit. You’ll go behind-the-scenes at the local aquarium and out to the beach to rescue marine animals in distress. And once you visit Gulf Shore, you just may find yourself wishing you could stay.

To find out more and Annette and her books, visit her website at AnnetteMardis.com. She loves to stay in touch with her readers, so drop her a line and sign up for her e-mail list for a chance to win prizes and get a first look at covers and excerpts.